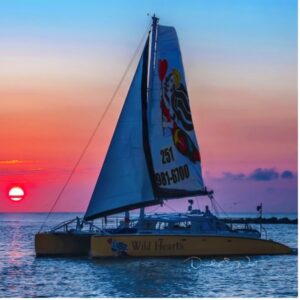 Whether you’re a sailing enthusiast or have barely been on the water, you are sure to enjoy these unique sailing facts.

Joshua Slocum was the first man to sail around the world by himself.

In 1898, Joshua Slocum, a Nova Scotian-born American, set out on a solo journey to circle the globe in his sailboat. His book about the journey, “Sailing Alone Around the World,” became an international best-seller.

The ideal wind speed for sailing is between 8 and 12 knots.

The easiest wind speed for maneuvering small and mid-sized boats is 8-12 knots. Anything between 5 and 8 knots is ideal for beginners, but anything under 5 knots can make your travels feel tediously slow.

If a ship lost its captain during a voyage, the sailors would raise blue flags, indicating their loss. This phrase is no longer associated only with mourning at sea; it is commonly used today when someone is feeling sad.

The smallest boat to sail around the world was 21 feet.

Alessandro Di Benedetto, also known as the ”Crazy Italian,“ holds a special world record. He circumnavigated the world in the smallest sailboat: a 21′ (6.5 m) vessel. His trip was completed in 268 days and 19 hours.

Sailboats can actually sail faster than the speed of the wind.

Boats generate their own wind, allowing them to “surf their own wave,” so to speak, which increases their speed.

Feel free to impress your friends with your new sea-worthy trivia!